How to Choose Diesel Generator Set in Plateau Area

In plateau areas, due to changes in environmental factors, the actual use conditions of engineering electromechanical equipment are greatly different from the original design conditions, resulting in a serious decline in the performance and reliability of engineering electromechanical equipment, which has caused national economic and national defense construction. Continuous losses. Therefore, strengthening the basic research work of engineering mechanical and electrical equipment for plateau environment adaptability technology is indispensable for the development of high-prototype engineering mechanical and electrical equipment. Affected by the special environmental conditions of the plateau, the power of the prime mover of the diesel generator set has decreased, the oil and diesel consumption has increased, and the thermal load has increased, which has a greater impact on the power of the generator set and the main electrical parameters; even for supercharged diesel generators, due to the prime mover The substance affected by the plateau conditions has not changed, but the performance decline has been reduced, and the problem still exists. Therefore, the fuel consumption rate, thermal load increase and reliability decline of the generator set can cause economic losses to users and the country up to 100 million yuan each year, which seriously affects the social benefits of plateau areas and the effectiveness of military equipment support; the decline in power performance, As a result, the load capacity that the diesel generator should have when in use is reduced, and the equipment and the power grid are unable to achieve their due work and production capacity due to insufficient power supply.

Below, we start from theoretical analysis, combined with examples, to discuss the impact of the plateau environment on the performance of diesel generator sets and countermeasures. To solve the problem of the power drop of the diesel generator set caused by the plateau environment, the power drop of the prime mover diesel engine must be solved first.

Through a series of plateau adaptable technical measures such as power recovery type supercharged and intercooled, it can effectively restore the power, economy, thermal balance and low-temperature starting performance of the motive diesel engine of the diesel generator set, so that the electrical performance of the generator set can be restored to The original level, and will have strong environmental adaptability in a wide altitude range. 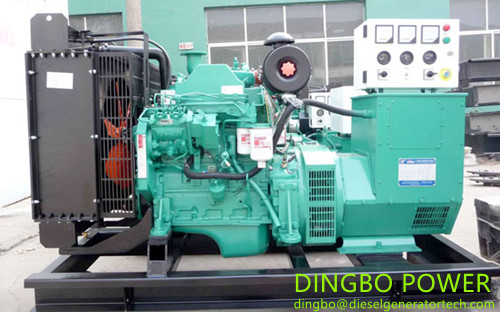 2. The frequency of the generator set is determined by its own structure, and the change in frequency is directly proportional to the speed of the diesel engine. Since the governor of the diesel engine is a mechanical centrifugal type, its working performance is not affected by changes in altitude, so the degree of change in the steady-state frequency adjustment rate should be the same as in low altitude areas.

4. According to the analysis and test, the performance of diesel generator sets decreases with the increase in altitude, the fuel consumption rate increases, and the heat load increases, and the performance changes are very serious.  After the implementation of a complete set of technical measures to restore the plateau adaptability of the turbocharged and intercooled power, the technical performance of the diesel generator set can be restored to the original factory value at an altitude of 4000m, and the countermeasures are completely effective and feasible.

1. Due to the low air pressure in the plateau area, the air is thin, and the nutrient content is low, especially for the naturally aspirated diesel engine, the combustion condition becomes worse due to the insufficient air intake, so that the diesel engine cannot emit the original specified calibrated power. Even though the diesel engines are basically the same, the rated power of each type of diesel engine is different, so their ability to work on the plateau is different. Taking into account the tendency of ignition delay under plateau conditions, in order to operate the diesel engine economically, it is generally recommended that the fuel supply advance angle of the naturally aspirated diesel engine should be appropriately advanced. As the altitude increases, the power performance decreases, and the exhaust temperature increases, users should also consider the high altitude working capacity of the diesel engine when choosing a diesel engine, and strictly avoid overload operation. According to experiments conducted this year, for diesel engines used in plateau areas, exhaust gas turbocharging can be used as a power compensation for plateau areas. Exhaust gas turbocharging can not only make up for the lack of power in the plateau, but also improve the smoke color, restore power performance and reduce fuel consumption.

2. With the increase in altitude, the ambient temperature is also lower than that in plain areas. Generally, the ambient temperature will drop by about 0.6 degrees Celsius for every 1000M increase. In addition, due to the thin plateau air, the starting performance of diesel engines is better than that in plain areas. Difference. When using, the user should take auxiliary starting measures corresponding to low temperature starting.

3. As the altitude increases, the boiling point of water decreases, while the wind pressure of the cooling air and the quality of the cooling air decrease, and the heat dissipation per kilowatt per unit time increases, so the heat dissipation condition of the cooling system is worse than that of the plain. Generally, it is not advisable to use an open cooling cycle in plateau altitude areas, and a pressurized closed cooling system can be used to increase the boiling point of the coolant when used in plateau areas. According to the manager who has sold and used diesel generator sets for many years, Dingbo Power recommends that customers should choose Volvo diesel generator sets to ensure that the output power of diesel generator sets can meet the requirements for use, and fuel consumption will not increase.