The AC exciter in the brushless AC synchronous Weichai diesel generator has a special armature structure. The following example takes the TFW series brushless AC synchronization as an example to introduce the structure of the generator. This type of Weichai diesel generator is made of Chenshang type, the base is welded by steel plate, the front and rear cover are cast iron structure, and the axial ventilation is self-cooling. After the balance is adjusted, it is supported by two bearings. The end cover of the generator is equipped with a flange that connects with the prime mover to facilitate the installation of the unit. The stator of the AC exciter is located on the outer side of the end cover bearing (the 90kW and 120kW units are located on the inner side), and the AC exciter armature is coaxial with the power generation Shanlin shaft.

The stator is composed of a stator core, a stator H and a base. The fixed-r iron core and stator winding are the parts that generate induced electromotive force and current, and this part is called the armature. The stator core is an integral part of the magnetic circuit of the synchronous generator. In order to reduce the eddy current loss, the core is generally laminated with two silicon steel sheets with insulating paint. Evenly distributed slots are opened on the iron core to embed the discharge pivot winding. The stator windings of diesel generators are composed of coils wound with high-strength poly-enameled copper wire, and the coils are embedded in the iron core slot according to certain technical requirements. When installing the three-phase windings, they should be embedded symmetrically, forming an electrical phase angle of 120". Shumu is the bracket of the generator, which is used to fix the armature and support the rotor together with the front and rear covers. In the frame]-side installation There is an outlet box, and a wiring board in the box to facilitate the lead out of the AC power supply.

The local power generation book is a salient pole transition type, and the 4 magnetic poles of the rotor core and the magnetic dragon fan are integrated, and they are formed by the Chongfu division. A damping cage is installed on the surface of the rotor magnetic pole core (well connected operation). The generator has a good performance index under unbalanced load, and can reduce the overvoltage that appears on the rotor group during the dynamic process. There is a centrifugal fan on the rotor.

The stator of the exciter is used to generate the magnetic field. The iron core is made of fQ steel plate and has multiple magnetic poles to improve the positive performance of the exciter. After the AC midgut-to-rectifier is rectified, it supplies AC synchronous power generation. Shirt hoe magnetism.

The rotor of the exciter is the armature shaft coaxial with the earth generator. The armature winding is connected by a three-phase star connection, and the neutral point is not led out, but there are 4 Fenglang outlet wires connected to the rotating rectifier (essentially 3 lead wires, but one of the phases is divided into two head leads). 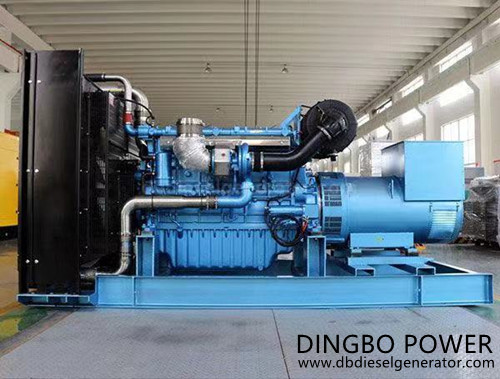 The rotating silicon rectifier is fixed on the armature support of the exciter (the rectifiers of the 90kW and 120kW generators are placed outside the excitation end cover). There are a total of 6 rectifier elements, of which 3 elements with bolts as anodes are fixed on the I'-circular conductive Plate, and the other 3 bolts are the cathode components are fixed on another conductive plate. The two sets of components are insulated from each other and installed on a common insulating ring, which becomes a silicon rectifier device. The AC power source comes from the AC excitation armature, and its DC output line is connected to the rotor coil of the earth generator through the new L at the center of the shaft.

If you have an idea to buy a diesel generator, you are welcome to contact Dingbo Power by email dingbo@dieselgeneratortech.com.

Next What are the Advantages of Diesel Generator Sets in Use