Diesel generator set is a kind of power generation equipment with high precision parts, and the selection of engine oil is also relatively high. Engine oil is the blood of diesel generator set, which has great significance function of lubrication, friction reduction, heat dissipation, sealing, vibration reduction, rust prevention, etc. But many users have such doubts: can new and old oils, oils of different brands and different viscosities be mixed? Dingbo Power give the answer is all is impossible, why? Let's look at the following: 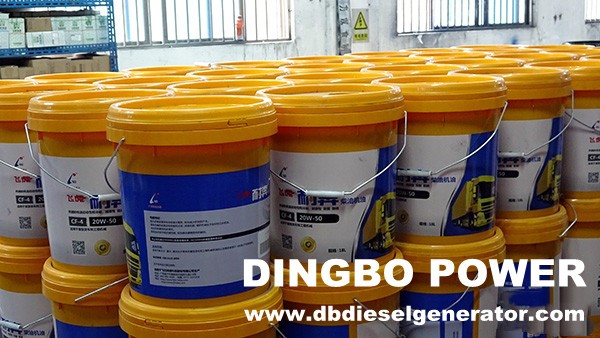 1. Mixed use of new and old engine oil

Turbidity of the engine oil: No matter whether the brand is the same or not, the mixed engine oils of different models may appear turbid. Because the chemical additives of each type of engine oil are different, a chemical reaction may occur after mixing, which reduces the lubrication effect, and may also produce acid-base compounds to accelerate the damage of engine parts.

Abnormal exhaust: The mixing of different brands of engine oil may also cause abnormal exhaust smoke, such as black smoke or blue smoke. Because the oil may be diluted after being mixed, the oil easily enters the cylinder and burns, causing blue smoke from the exhaust pipe. Or, after the oil is mixed, the cylinder is not tightly sealed, causing the exhaust to emit black smoke.

Produce sludge: The mixing of different engine oils is easy to produce sludge, which will reduce the heat dissipation effect of the engine oil, leading to high temperature of the engine and easy to cause failure. It will also block filters, oil passages, etc., resulting in poor circulation and the engine cannot be lubricated.

Accelerated wear: When the oil is mixed, its anti-wear performance may change greatly, destroy the oil film, and easily cause the piston and cylinder wall to wear. In severe cases, the piston ring will break.

Through the above introduction, we believe that users understand that mixing oil should be avoided as much as possible, as different types of additives are different, which may cause chemical reactions and cause various failures and damage problems. If the diesel generator set is running short of oil and it is necessary to mix the oil, you should try to use the same type of oil with the same viscosity. Replace the oil as soon as possible after the generator set has stopped to cool down.