The characteristics of connecting rod bearing noise are closely related to changes in load and speed. When the speed and load increase, the noise also increases. When it accelerates suddenly, the continuous noise of "Dangdang" is especially obvious. 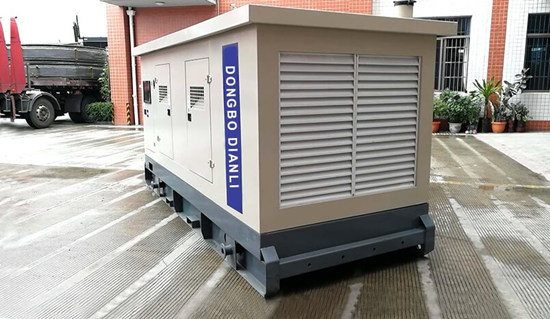 5.Abnormal noise of the cylinder.

When diesel generator set is running at idling speed or slightly higher than idling speed, it emits a "dangdang" noise similar to the beating of a small hammer, which is the so-called knocking cylinder, which is accompanied by excessive diesel consumption and high oil consumption. The reasons for knocking cylinders are: piston and cylinder wear severely, piston and cylinder wall matching clearance is too large; piston deformation, piston pin and connecting rod bushing too tight, connecting rod deformation, piston skew operation in the cylinder; fuel injection poor operation of the device, improper adjustment of the early oil supply angle, or uneven oil supply of each cylinder, etc.

If the big end of the connecting rod of the oil pan hits the oil pan, the oil pan will vibrate and make a relatively depressed "percussion vibration" noise.

7.Abnormal noise of the flywheel housing.

Since the effective torque of electric generator set is output by the flywheel, once the flywheel screws are loosened, it will inevitably produce fierce vibration and make a big abnormal noise at the flywheel housing.

8.Abnormal noise in the gear chamber.

The noise in the gear chamber is directly related to the tooth gap. When the backlash exceeds the regular value, intense noise will be generated. The abnormal noise produced by the excessive gear gap is dense and clear "rusting" sound, and the loudness is intense.

Above are eight major factors of abnormal noise in generator set, hope they are helpful to you. Dingbo Power not only provide technical supports, but also supply diesel generating set, if you are interested, welcome to contact us, our email is dingbo@dieselgeneratortech.com, we will guide you to choose the best product.

Previous How to Decrease the Consumption of Perkins Diesel Genset

Next Which Generators are Suitable for Construction Sites