1. No matter whether diesel generator is running or not, the ECU, sensor and actuator must not be disconnected as long as the ignition switch is on. Due to the self induction of any coil, a high instantaneous voltage will be generated, causing serious damage to the ECU and sensor. The electrical devices that cannot be disconnected are as follows: any cable of the battery, prom of the computer, wire of any computer, etc.

2. Do not unplug the wire plug (connector) of any sensor when the diesel generator is running or in "on" gear, which will cause artificial fault code (one kind of false code) in ECU and affect the maintenance personnel to correctly judge and eliminate the fault. 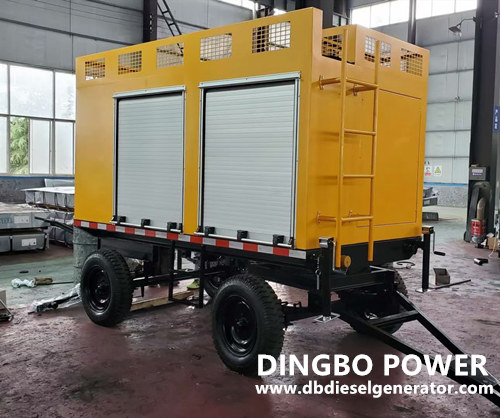 3. When disassembling the high-pressure oil circuit, the pressure of the fuel system shall be relieved first. Pay attention to fire prevention when overhauling the oil circuit system.

4. When arc welding the diesel generator equipped with electronic control system, disconnect the power supply line of ECU to avoid damage to ECU caused by high voltage during arc welding; When repairing the diesel generator near the ECU or sensor, pay attention to protect these electronic components. When installing or removing the ECU, the operator should ground himself first to avoid static electricity on the body damaging the circuit of the ECU.

6. When removing and installing the diesel generator battery, the ignition switch and other electrical equipment switches must be in the off position. Remember that the power supply system used by the electronically controlled diesel generator is negative grounding. The positive and negative poles of the battery shall not be connected reversely.

7. The diesel generator should not be installed with a radio station with a power of 8W. When it must be installed, the antenna should be as far away from the ECU as possible, otherwise the circuits and components in the ECU will be damaged.

a. The test lamp cannot be used to check the sensor part and ECU of the diesel generator electronic control system (including the terminal).

c. on the diesel generator equipment equipped with electronic control system, it is forbidden to check the circuit with grounding fire test or wire removal fire scratch.

Generally, do not open the ECU cover plate of the diesel generator, because most of the faults of the electronically controlled diesel generator are external equipment faults, and ECU faults are relatively few. Even if the ECU is faulty, it should be tested and repaired by professionals.