The diesel generator set is suddenly hot during operation. This phenomenon usually occurs when the parts are suddenly damaged. Sudden damage of parts will stop the pressure circulation of coolant or cause sudden overheating due to a large amount of water leakage, or there is a fault in the temperature test system.

The causes of generator overheating are:

③ The water pump is suddenly damaged and the coolant circulation stops.

④ The fan belt is broken or the pulley tensioning support is loose.

⑤ The fan belt is dropped or damaged.

⑦ The radiator is frozen and blocked. 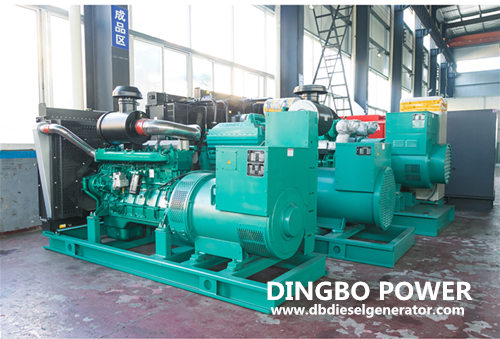 Diagnosis and treatment of generator overheating:

① First observe whether there is a large amount of water leakage outside the engine. If there is any water leakage at the drain switch, water pipe joint, water tank, etc., it shall be handled in time.

④ Check whether the exhaust pipe of engine and water tank is blocked and dredge it.

⑤ If there is no water leakage inside and outside the engine and the belt transmission is normal, check the circulating pressure of the coolant and repair it according to the "boiling" fault mentioned above.

⑥ The freezing of radiator generally occurs after cold start in cold season or flameout taxiing down a long slope. If the rotating speed is high after starting and the fan is forced to draw air, the lower part of the radiator just added with cold water will freeze. After the engine temperature rises, the coolant cannot be circulated greatly, resulting in overheating or rapid boiling. At this time, heat preservation measures shall be taken for the radiator to reduce the exhaust volume of the fan, or heat the frozen part of the radiator to promote the ice to dissolve quickly. When the radiator is frozen when the car goes down a long slope, stop immediately and run at idle speed to warm up the car.

Precautions during use: select windward or shady place to stop immediately, open the engine cover, keep the engine idling, gradually reduce the temperature, and do not shut down immediately. If it is difficult to start the engine after flameout, try to make the crankshaft rotate slowly to prevent the piston from sticking to the cylinder wall under high temperature. During the cooling process, do not rush to open the radiator cap or expansion tank cap. When opening the cover, pay attention to safety to prevent scalding caused by high-temperature water or steam. In case of excessive water consumption, appropriate soft water shall be supplemented in time.

Next Installation Notes of 250KW Yuchai Genset and UPS