Why Does The Exhaust Pipe Of Diesel Generator Drip Oil

After the contact between the generator manufacturer and many users, it is found that many people believe that large load can not be carried during the running in period after the purchase of the new engine. For example, the 300kW generator set only carries a small water pump of 5-6kw, resulting in the incomplete combustion of fuel oil in the diesel generator set, and the incompletely burned fuel oil will be discharged from the smoke exhaust pipe, which is the phenomenon of oil dripping in the smoke exhaust pipe. Such abnormal phenomenon may occur when the load of diesel generator set is less than 50% during the running in period or in use. Operating for a long time without load or small load will bring more damage to the diesel generator set.

Why does the exhaust pipe of diesel generator drip oil?

1. The sealing between the piston and the cylinder block of the diesel generator set is not good, and the smooth oil in the cylinder will string into the combustion chamber, resulting in oil burning and blue smoke.

2. Now the diesel engines of diesel generator sets are basically supercharged. Whenever there is low load and no load, because the pressure is low, it is very simple, resulting in the decline of the sealing effect of the oil seal, resulting in the phenomenon of oil burning and blue smoke. 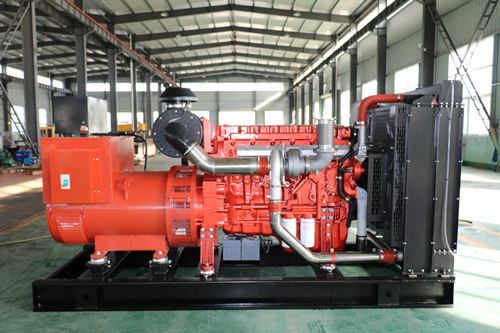 When so much oil enters the cylinder, it will burn together with diesel, which constitutes the situation of burning oil and emitting blue smoke. However, we all know that engine oil is not diesel. Its basic function is not combustion, but smoothness. Therefore, the engine oil entering the cylinder will not be completely burned. Instead, carbon deposits will be formed in the valve, air inlet, piston crown and piston ring, and will be discharged along the exhaust pipe, forming the phenomenon of oil dripping in the exhaust pipe.

The following eight matters shall be paid attention to in the layout of smoke exhaust pipe of diesel generator set:

1. It must be connected with the exhaust outlet of the unit through bellows to absorb thermal expansion, displacement and vibration.

2. When the silencer is placed in the machine room, it can be supported from the ground according to its size and weight.

3. In the part where the direction of the smoke pipe changes, it is recommended to install expansion joints to offset the thermal expansion of the pipe during unit operation.

4. The inner bending radius of 90 degree elbow shall be 3 times of the pipe diameter.

5. The first stage silencer shall be as close to the unit as possible.

6. When the pipeline is long, it is recommended to install a rear silencer at the end.

7. The smoke exhaust terminal outlet shall not directly face flammable substances or buildings.

8. The smoke exhaust outlet of the unit shall not bear heavy pressure, and all rigid pipelines shall be supported and fixed with the help of buildings or steel structures.

What are the reasons for abnormal smoke exhaust of diesel generator set?

The main causes of black smoke from exhaust include the following aspects:

a. The load of diesel engine is too large and the speed is low; More oil, less air, incomplete combustion;

d. The air filter is blocked;

e. Individual cylinders do not work or work poorly;

h. The oil supply of each cylinder of diesel engine is uneven or there is air in the oil circuit;

i. Poor atomization or oil dripping of fuel injection nozzle.

Dingbo Power is a diesel generator set manufacturer in China, founded in 2006, only produces high quality diesel generators with range 25kva to 3125kva. If you are interested, welcome to contact us by email dingbo@dieselgeneratortech.com.

Previous What is Suitable Water Temperature for Perkins Generator

Next Advantages of Parallel Operation of Diesel Generating Sets